Advocating for the Rights of People with Albinism

Alongside practical support to prevent skin cancer and help people with albinism to lift themselves out of extreme poverty, Advantage Africa works with SNUPA to advocate for changed policy and practice at local and national level. This includes targeted advocacy with the Ugandan Government to address the needs of people with albinism in national planning as well as hosting events to challenge myths and ignorance surrounding the condition. 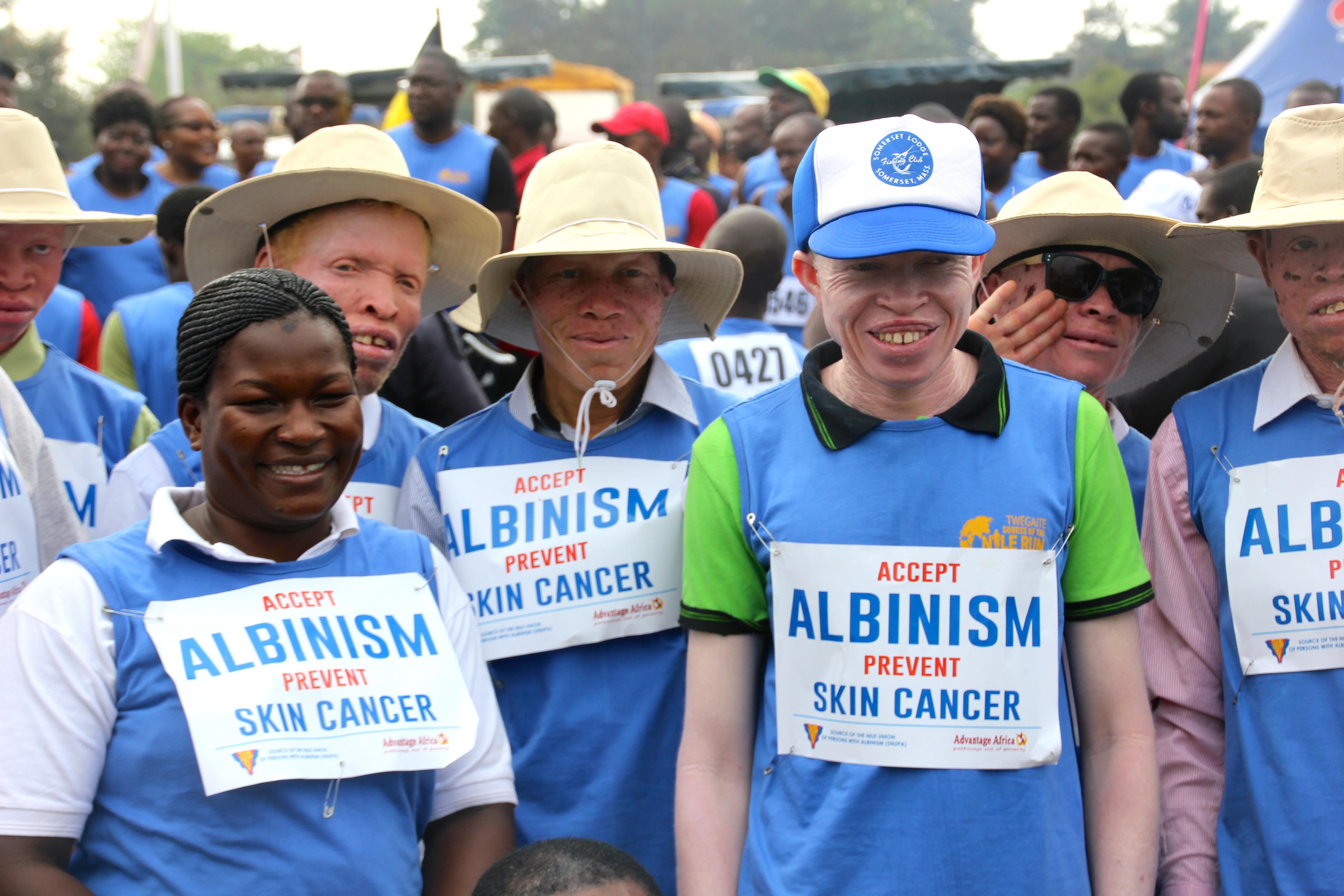 In 2017, we lobbied the Ugandan Government’s Revenue Authority to waive tax and duty on the import of high sun protection factor sunscreen to keep people safe from skin cancer. That April, SNUPA members participated in Jinja’s Tweigate marathon during which they shared messages about skin cancer prevention and presented recommendations about tax-free import to the Speaker of the Ugandan Parliament.

URA permission to waive duty and tax was fully granted in 2018 when we were able to import almost one tonne of donated high quality sunscreen for people with albinism.

While this is a significant step forward in improving the health and life expectancy of people with albinism in the Busoga sub-region of Uganda, we are working towards ensuring that life-saving sunscreen and dermatological care are accessible across the country. As well as health, we continue to advocate for inclusion and support of people with albinism in early childhood, education, employment and justice as outlined in our research recommendations 'We Are Human Too' and summarised here. 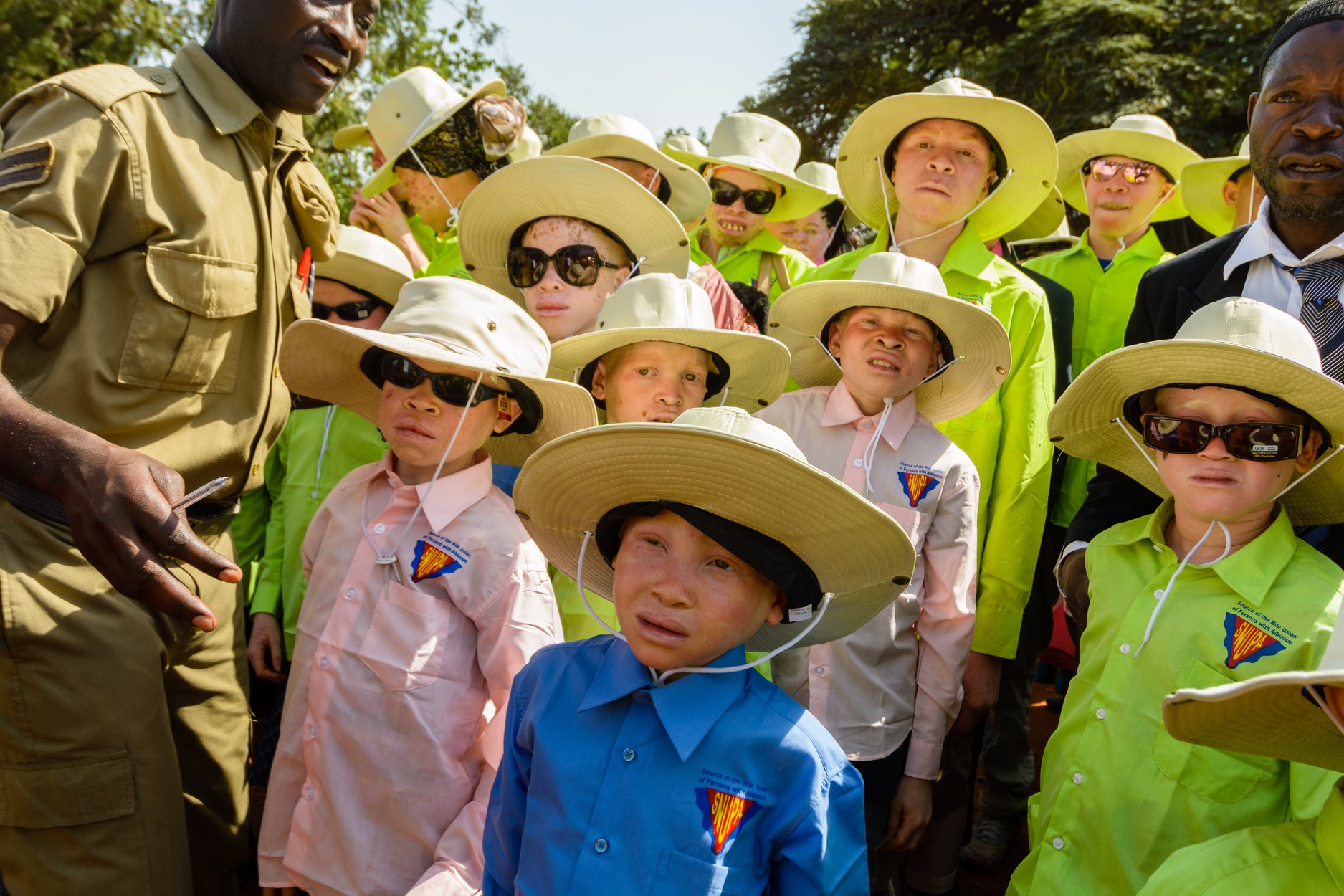 On 18th December 2014, the UN General Assembly adopted a resolution proclaiming 13th June as International Albinism Awareness Day. Advantage Africa has supported SNUPA to host an IAAD event every year since then. Radio and TV chat shows publicising the day across Eastern Uganda reach hundreds of thousands of people with information about albinism. 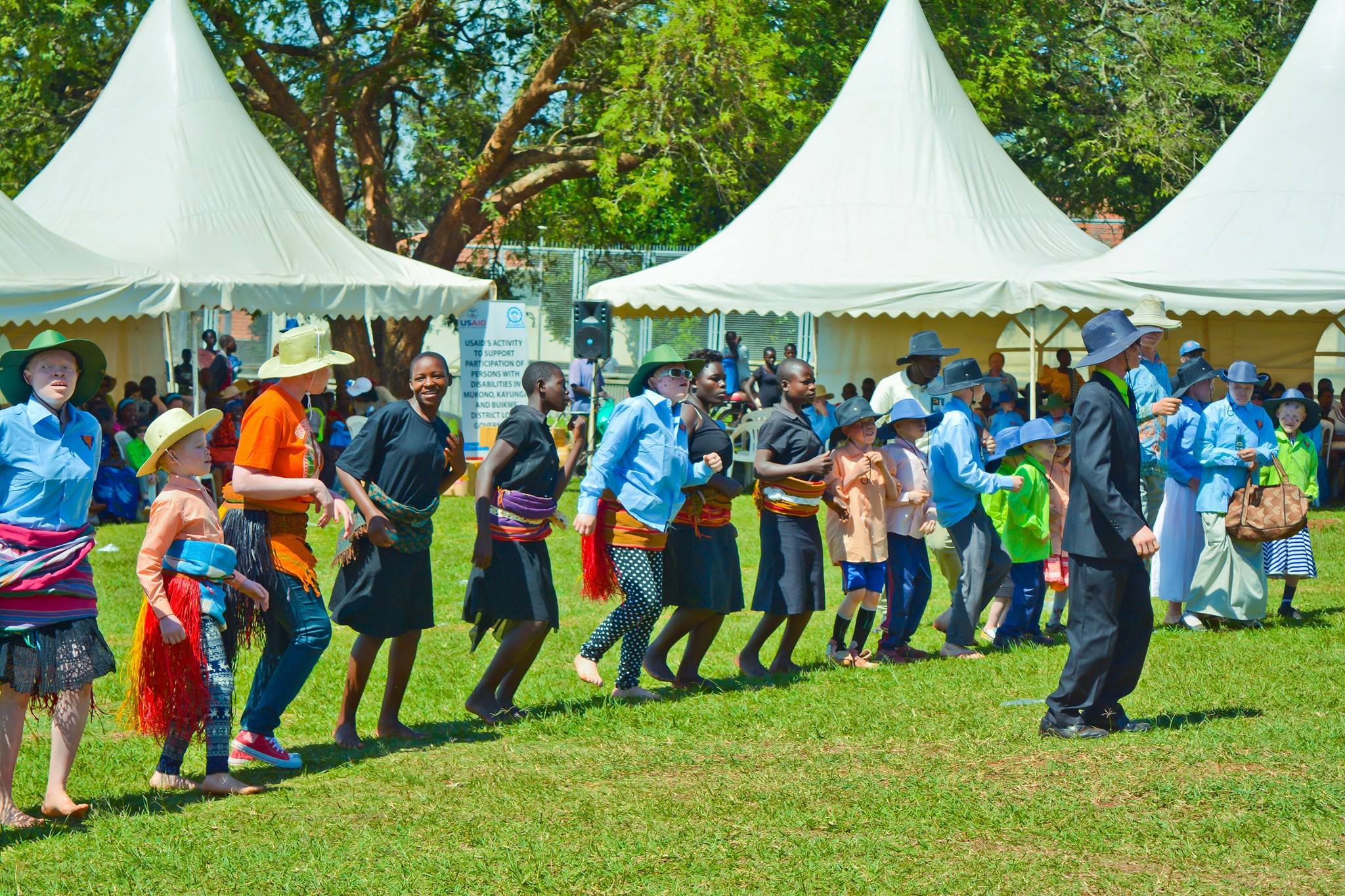 Each 13th June 700 people with albinism gather in Jinja for a march, speeches and entertainment attracting up to 5,000 people. As part of our commitment to helping people with albinism to protect themselves from skin cancer, the SNUPA team uses the day to distribute sunscreen, wide-brimmed hats, sunglasses and long-sleeved shirts for adults and children. Skin clinics led by our dermatologist Dr. Ngobi are also conducted. 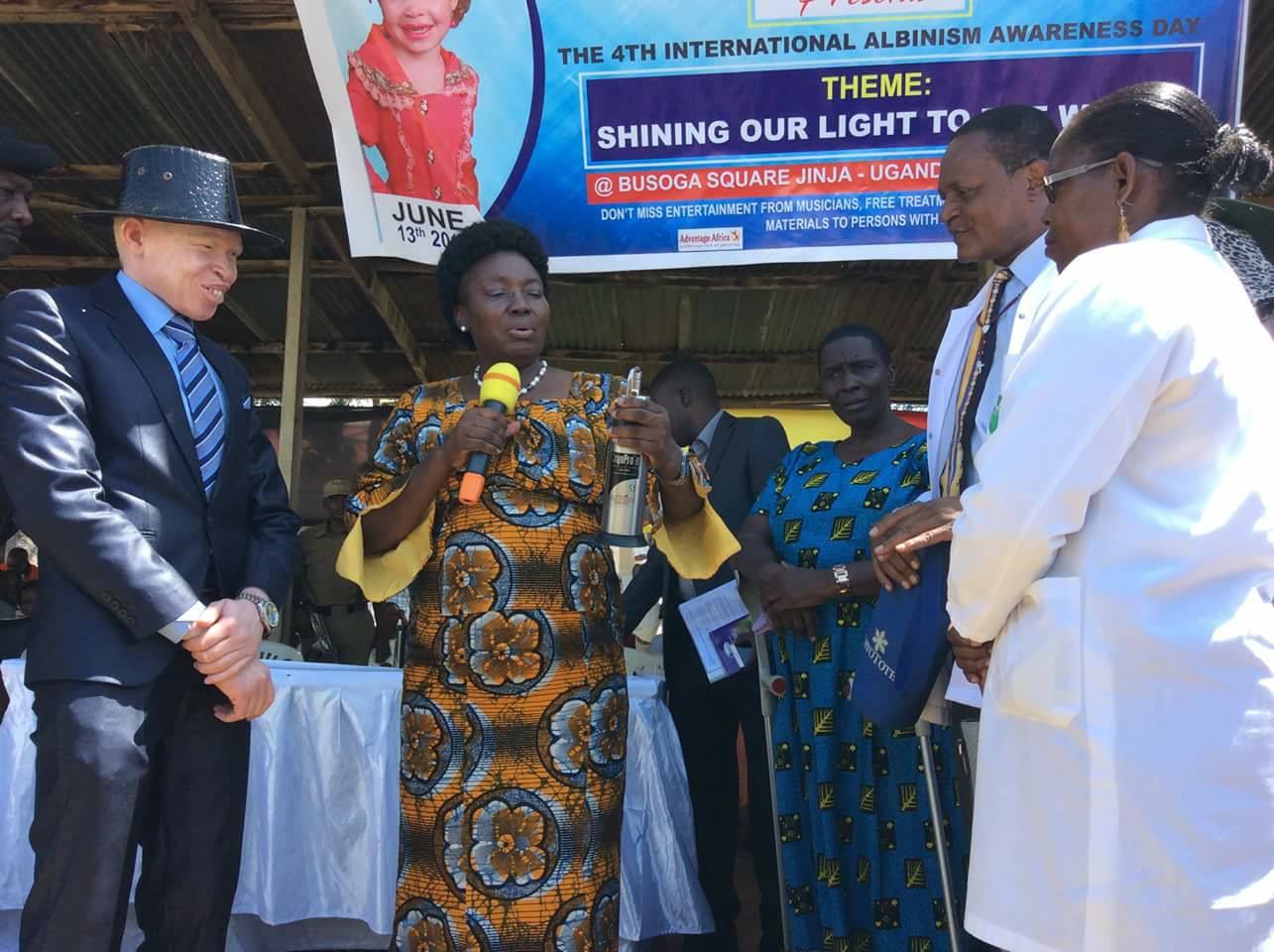 SNUPA’s IAAD events are attended by high profile local and national government representatives. In 2018 this included Speaker of Parliament Rt. Hon. Rebecca Kadaga who pledged to lobby for the inclusion of people with albinism in the State Cancer Policy.

Through media attendance at our IAAD events, messages about the equal human rights of people with albinism have reached millions of Ugandan in national TV bulletins. Coverage has also reached international audiences through Al Jazeera, the BBC and The Guardian. 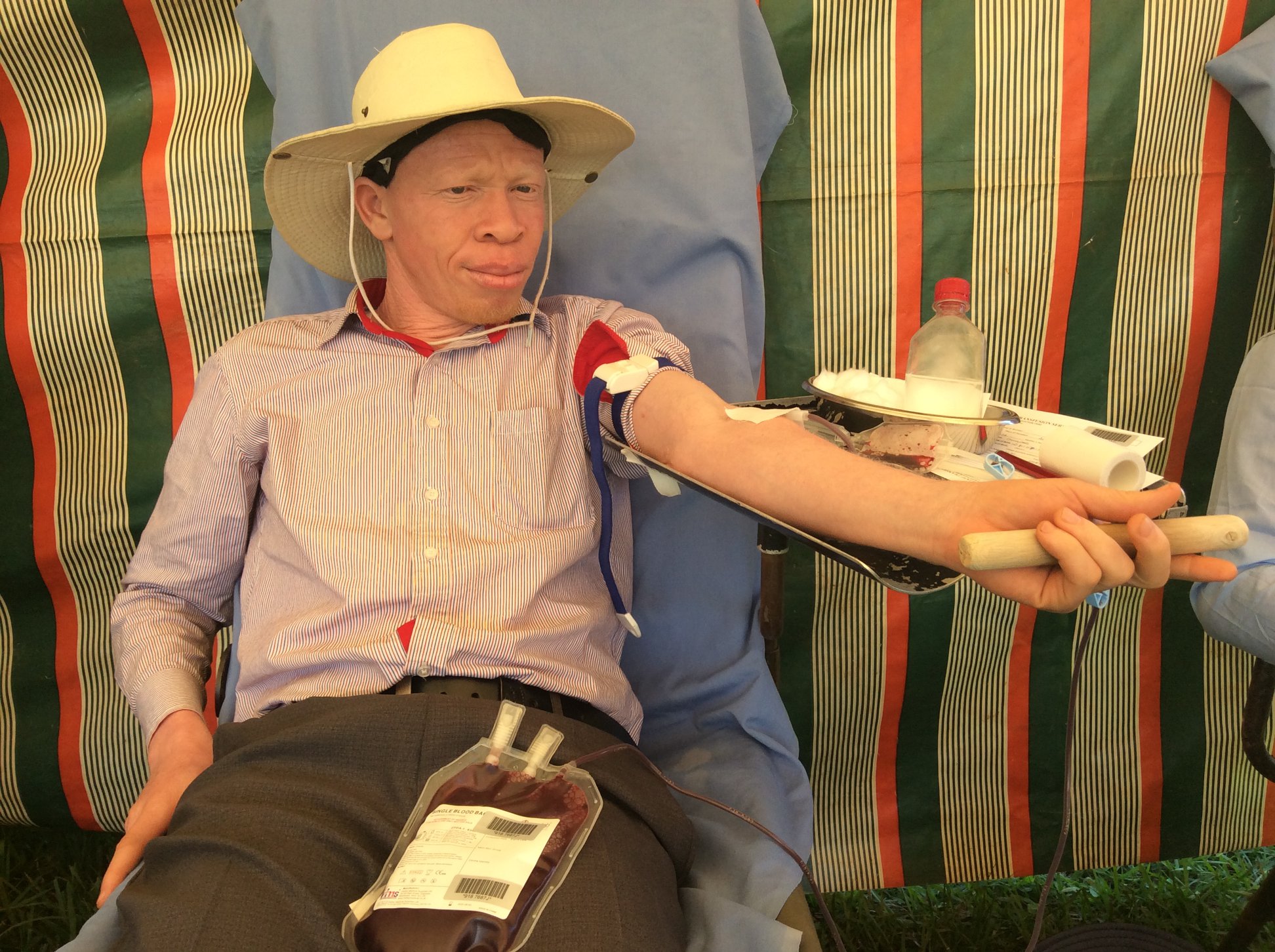 The SNUPA team makes the most of every opportunity to dispel myths and raise awareness about the equal humanity of people with albinism. This includes taking part in blood donation campaigns which have been stepped up in Uganda to address critical shortages across the country. Not only does this provide much needed supplies, it also shows that people with albinism have blood just like everyone else!