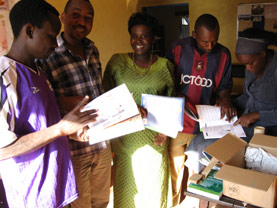 Rescue Team for HIV & AIDS is a community based organisation made up of a dynamic and dedicated team of seven people who are committed to the development of their own community. When Advantage Africa started its partnership with Rescue Team in 2006, they where a passionate but informal group whose common goal was to try to tackle the sickness and death caused by HIV in their location of Kibwezi  District. Since then, with the help of Advantage Africa, Rescue Team have come a long way. They now have a well established premises and large community hall from where they run a range of services, events and outreach projects. These include HIV counselling and testing, home based care for people affected by HIV, support for vulnerable children and youth and an ongoing education and advocacy project.

Rescue Team’s approach to home based care for people affected by HIV is also developing, moving away from direct hand-outs and more towards sustainable approaches which includes income generation initiatives for the beneficiaries to help themselves.

As part of our HIV education in schools we spent a day with Kisayani secondary school pupils. At the end of the workshop 40 children consented to voluntary counselling and testing. I’m pleased to report that they all tested negative. This is a good sign that the messages are now getting through. 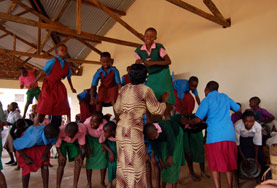 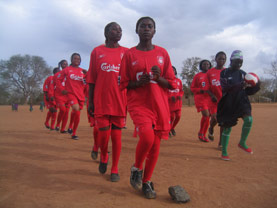 At Advantage Africa we select our partners carefully, and then we commit to them for the long term. Development work is not a quick process, so I’m proud to say that we stick by our partners, and it’s amazing how they grow and flourish into organisations that make a significant difference with relatively modest resources.